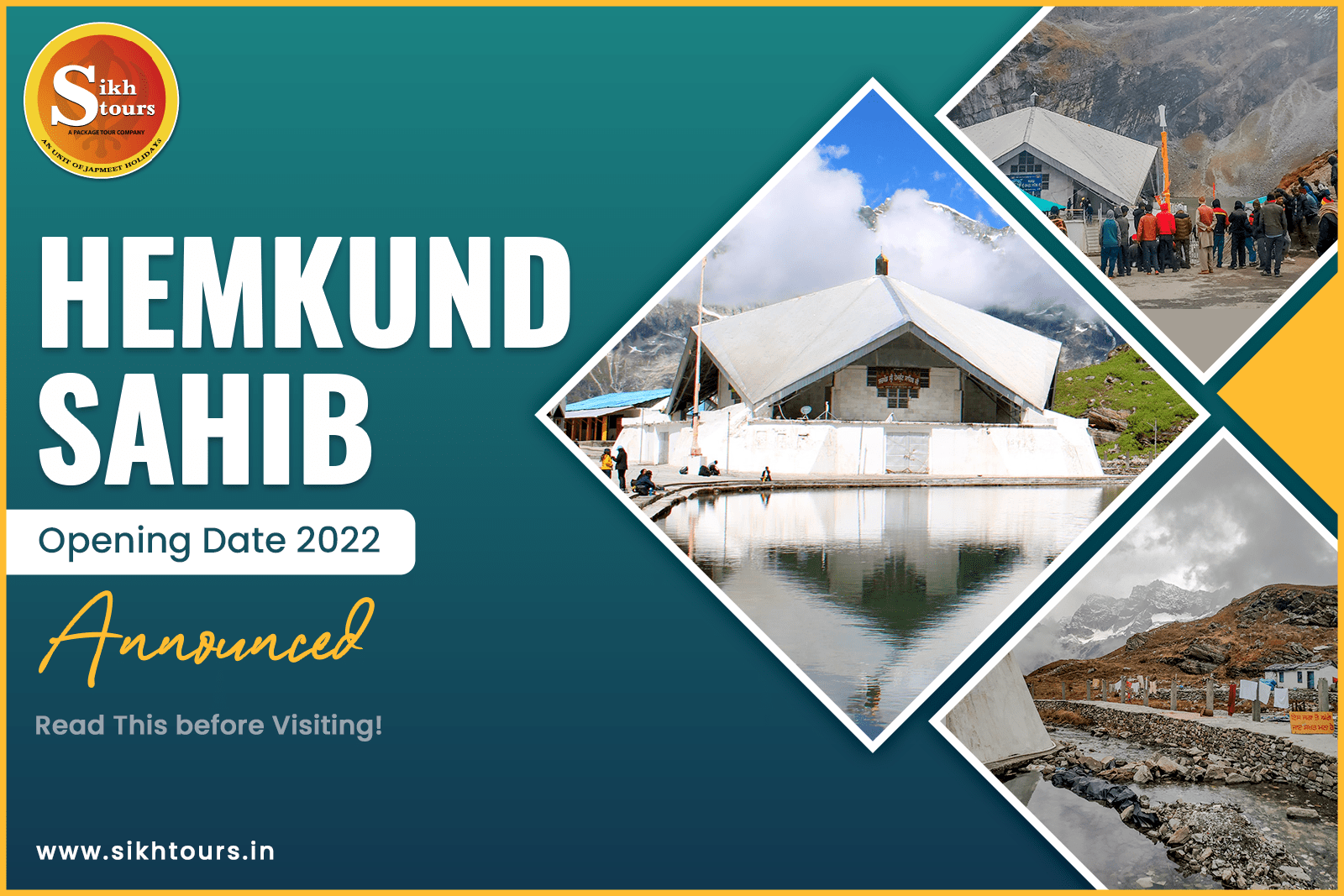 Hemkund Sahib Opening Date 2022 for yatra by pilgrims has been announced by the officials. The state Sikh shrine will be open to the faithful from May 22, 2022. The portal of Hemkund Sahib is open every year in the last weeks of May.

Speaking to reporters in Govindghat, he said the decision on the pilgrimage this year (2022) was made at the same meeting of the Gurudwara Council. Although Hemkund Sahib will be open until early October, summer is considered the ideal time to visit Hemkund.

Where is Hemkund Sahib Located?

Hemkund is a Sanskrit name derived from Hem (‘snow’) and Kund (‘cup’). Hemkund Sahib (also spelt as Hemkunt) is a Sikh place of worship and pilgrimage. The Gurudwara Hemkund Sahib is located in the Chamoli district of Uttarakhand. While Shri Hemkund Sahib was dedicated to Shri Guru Gobind Singh Ji (1666-1708), the 10th Sikh Guru, Hindu pilgrims kept the shrine in perfect harmony with their mythical god Lakshamana and spoke of the stories related to the sites in the Ramayana and Mahabharata. Together with Char Dham Yatra, Hemkund Sahib Yatra is open for 5-6 months every year, usually from May to October.

Followers of Sikhism believe that Guru Gobind Singh Ji meditated here during the first 10 years of his life on the quiet shores of a pristine lake. In the late 19th century, Nirmala scholar Pandit Tara Singh Narotam gave a brief overview of various Sikh Pilgrimage sites, including Hemkund Sahib.

How to Reach Hemkund Sahib?

India’s high mountain Gurudwara Hemkund Sahib can only be reached on foot from Ghangaria in the Chamoli district of Uttarakhand. Don’t forget to click on some beautiful photos here, it’s really a picturesque moment. Buses and taxis from cities such as Delhi, Punjab and Dehradun are easily from Govind Ghat. You can also take a helicopter ride to Shri Hemkund Sahib.

You can visit the nearest Airport i.e Jolly Grant Airport in Dehradun. It is about 268 km from

You can book your journey on train as well, as Rishikesh, Haridwar & Dehradun all have Railway Stations. The nearest rail-head from Hemkund Sahib is Rishikesh that is approximately 200 km.

If you are traveling to Hemkund Sahib by road, you have to come at the entry point from Rishikesh, i.e. Govind Ghat. Govind Ghat is at a distance of 332 km and a trek of 20 KM from Gobind Ghat will take you to the portals of Shri Hemkund Sahib.

Hemkund Sahib is located 6 KM (on a steep road) from Ghangaria. This star-shaped Gurudwara is made of white marble and concrete and is located on the shores of the pristine Hemkund. It can be reached by passing through several stunning waterfalls, dense forests and mesmerizing views of the Himalayan mountain ranges.

With this yatra opening date in 2022, you will have the opportunity to see the beauty of numerous waterfalls, the enchanting view of the Himalayas and other places, as well as the highest Gurudwara of the Sikh community, which is the Gurudwara Shri Hemkund Sahib during this trekking trip.

Upon entering Hemkund Gurudwara, you are greeted in a gigantic room fabulously decorated with lights and exquisite tapestries. Several images of Sikh Gurus can be found, and the top roof is designed to illuminate the Guru Granth Sahib Ji. The design & construction of the current gurudwara at Hemkund began in the mid-1960s after Major General Harkirat Singh, KCIO, Chief Engineer of the Indian Army visited the gurdwara.

There are also visits to the shrines of Devprayag, Rudraprayag and Karnprayag, continuing the sacred Hemkund Sahib Gurudwara from the local villages of Govind Ghat and Ghangaria, which offers a beautiful trekking route with breathtaking views of all over. However, you can also explore nearby Hemkund Sahib gurudwara attractions, such as Hemkund Lake, etc. The best part is that those who come to Hemkund Sahib after the announcement of the Hemkund Sahib Opening Date 2022 also visit the Valley of Flowers, which is 3-4 KM from Ghangaria Base camp. Moreover, to get to Hemkund Sahib, you must first visit Govindghat.

What Gurudwara Sri Hemkund Sahib Means to Sikhs and Hindus in the Himalayas Hemkund Sahib Yatra is highly regarded by Sikhs as an important place of pilgrimage.

According to the Sikh scriptures, Hemkunt is dedicated to the tenth Sikh Guru Guru Gobind Singh. The powerful side of nature is reflected in the lake water. Lake Hemkund is also mentioned in the Dasam Granth written by the 10th Sikh Guru himself. The sacred lake is located next to the Gurudwara Sahib and devotees dive into it before entering the Gurudwara Sahib. It is assumed to be a source of inspiration for the whole Sikh community.

How to Get to Hemkund Sahib from Delhi?

We, at Sikh Tours, provide the national & international tourists, especially pilgrims, an opportunity to visit such a significant place with customized tour packages. And, starting the trekking trip to Hemkund Sahib from Delhi includes visiting Haridwar-Rishikesh and the other places.

To reach Hemkund Sahib from Delhi, conveniently, follow the below mentioned steps:

To ease this, here is simple Road Route from Delhi to Hemkund Sahib:

So, as the Hemkund Sahib Opening Date 2022 has been declared, book your journey with us and get an unforgettable & cherishable experience of traveling to Hemkund Sahib