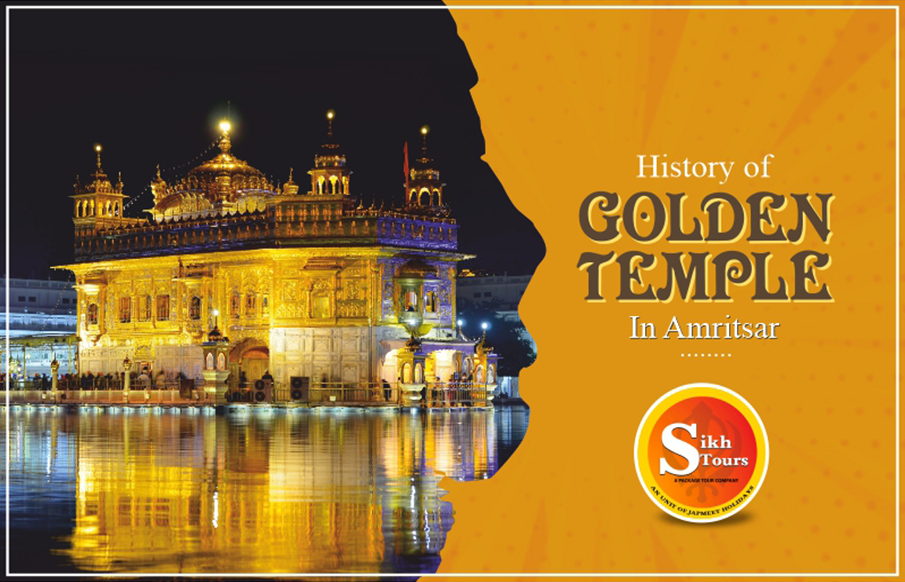 The Golden Temple in Amritsar, Punjab (also known as Harmandir Sahib or Darbar Sahib) attracts flocks of tourists from all over the world. The serenity of the entire complex appeals to locals and foreigners alike. While most of us know that it is the greatest spiritual site of the Sikh faith, few know the history of this Temple – how it was formed and the various steps that made it into the Temple as we know it today.

Let’s go through the four supreme historical facts about it:

The land where the holy temple in Punjab, Sri Harmandar Sahib is situated i.e. in Amritsar city, which was then called ‘Guru Da Chakk’, was chosen by the third Guru in Sikhism Sri Guru Amar Das. His disciple, Guru Ram Das, who would become the fourth Guru, was entrusted with taking forward the task of building a city centred around a temple (If you visit Amritsar, observe how the town expands from the periphery of the Temple). The town, at that time, was named ‘Ramdaspur’ after the Guru’s name.

Now, the question arises, when exactly did the Golden Temple in Amritsar come into being?

The foundation stone of this holy temple was laid by a Muslim Pir of Lahore-Sai Mir Mian Mohammad, in the year 1589, on the request of the fifth Guru, Guru Arjan whereas a copy of the Holy Book in Sikhism i.e. Adi Granth was placed in the Harmandir Sahib by the Guru in  1604. The Guru ensured that the Temple was built on a lower level and with the entrances into the complex open on four sides. Why does it have its four sides open? Because, He wanted it to be recognised as a humble place of devotion, accessible to everyone, and without any discrimination.

As for the name of the town, it finally came to be known as Amritsar after “Amrit Saras”, the pool of nectar, built by Guru Ram Das.

When you go to the Golden Temple, you will find that the temple itself is in the middle of the pool of nectar. Right before you enter the causeway that takes you inside, you will notice a tall, white building opposite it. This is the Akal Takht, the seat of power and authority.

It did not get formed alongside the Golden Temple. For a few decades after the construction of the Temple, it was attacked a few times due to which it was damaged. While this was fixed, the sixth Guru, Guru Hargobind, developed the complex even further. This is when Akal Takht was constructed.

The Akal Takht continues to deal with temporal issues and now it is also the headquarter of the political party in Punjab, Shiromani Akali Dal (SAD).

By now, we have the Temple, the pool of nectar (Sarovar), and the Akal Takht in Amritsar. However, it still did not resemble the Golden Temple, as you know it today. The feature that led to the “Golden” being prefixed to its name had not been added yet.

Maharaja Ranjit Singh, a leader of the Sikh Empire in the early 19th century, is the person behind bedecking the Temple. His generosity and devotion led him to renovate the Temple with marble and gold. By 1830, the newest form of the Golden Temple in Amritsar (Punjab) was complete.

In 1984, the military action resulting from the growing tension between the Sikhs and the State heavily damaged the Temple complex, particularly the Akal Takht. After an attempt by the Indian Government to build it, it was not deemed sacred by Sikhs. The final reconstruction then began after a proper demolition, and the Akal Takht we see today was finally formed in the Golden Temple.

In a nutshell, the history of the Golden Temple is richer than we can contain in one article, yet we have jotted down the four rarest but supreme historical points about the Golden Temple, you must know.

We must say that if you have been there in Amritsar, you would know that the entire complex is enormous. You will find centuries-old trees, clock towers, museums, langar hall or community kitchen, and much more. This will add a great adventure to your journey to Amritsar, Punjab.

In recent times, the complex has also come to install various informative boards in English, Hindi, and Punjabi across the site, so that visitors from all over the globe can understand the history and significance of the Golden Temple in Amritsar.

Must look out for them when you visit!